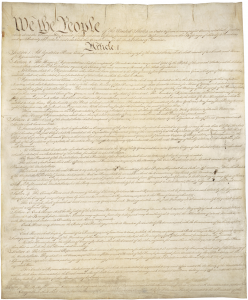 Over the years, the great debate over the U.S. Constitution has been divided, likely oversimplified, into two sides. The Federalists sought both a strong Federal government and speedy adoption of the proposed Constitution.  This was considered critical to the survival of the nation.  In the words of George Washington, “it is the best Constitution that can be obtained at this Epocha, and that this, or a dissolution of the Union awaits our choice, and are the only alternatives before us.” [footnote]“The Lees & the U.S. Constitution”, http://www.stratfordhall.org/meet-the-lee-family/the-lees-the-u-s-constitution/, retrieved 18 December, 2016[/footnote] Others however strongly feared the creation, intentional or otherwise of a new monarchy.  Many felt societies such as the Society of the Cincinnati could lay the groundwork for a new aristocracy or knighthood.  “Old republican” delegates such as Elbridge Gerry considered anything military or hereditary to be anathema [footnote]”Constitutional Convention (United States)”, Wikipedia, https://en.wikipedia.org/wiki/Constitutional_Convention_(United_States), retrieved 18 December 2016[/footnote]

With these two fundamentally opposing views, how then did the U.S. Constitution ever come to be?  The answer I would like to propose is a simple matter of marketing.  My contention is, the Federalists just did a better job of marketing their stance.  They realized sooner they would need to convince the general public, they got the word out faster and generally just out maneuvered the Anti-Federalists.  We will examine first the delegates to the Constitutional Convention, then the volume, timing and location of the writings and debates following the Convention on through the ratification process.